The current team chat landscape is truly a tale of two tools: Slack and Discord. Slack has been the go-to team communication platform for years, while Discord is most known for its voice communication, providing a non-interruptive experience that has been embraced by the gaming community.

So is Slack for work and Discord for gaming? Or is there more to it than that? To answer this question, we’re taking a closer look at these two tools to see how they compare.

Common Features and What We Looked For

Discord and Slack have a lot in common—especially on the surface. But when you peel back the layers, you can see that each platform is tailored to specific use cases. We’re comparing Slack and Discord on four main criteria. Click on any of the sections below, or jump to our comparison table for a summary.

The free Discord plan provides virtually all the core functionality of the platform with very few limitations. Free users get unlimited message history, screen sharing, unlimited server storage, up to eight users in a video call, and as many as 5,000 concurrent (i.e., online at the same time) users. The paid Discord plans simply add some customization options, including animated avatars and custom tags, in addition to increased file upload limits (up from 8MB to 50MB).

Slack’s free plan, on the other hand, is more limited. It allows for 10 integrations with third-party services, up to 10,000 messages stored in the history (which fill up quicker than you’d think), and up to 5GB of file storage per user. Plus, Slack limits video and voice calls to just two participants with the free plan—which means that, unless you pay up, it’s not as much a team collaboration tool as a pair collaboration tool.

Once you upgrade to a premium plan on Slack, you’ll start to see the perks coming in droves: The Standard plan ($8/user/month) offers unlimited message history, the ability to share channels with guests and third-parties (like freelancers or clients), plenty of integrations, voice and video calls for up to 15 participants, interactive screen sharing, and “priority support” from Slack’s customer service department, among many other features. If you want to up the ante, the Plus plan ($15/user/month) brings in enterprise-level features, including additional user authentication options, corporate exports for messages, provisioning and deprovisioning, and 99.99% guaranteed uptime.

Subscriptions work differently with Discord. Instead of buying it for your team and paying per user within your workspace, Discord sets it up so that each user can decide whether or not to subscribe to a premium plan.

Ultimately, if you’re looking for a free messaging tool, Discord will give you more without paying. But once you start upgrading, Slack’s extra features come in very handy.

Discord and Slack have very similar layouts, and as a result, the core experience is just shy of identical between both platforms. There’s a list of channels in the left sidebar, along with the ability to toggle between teams. 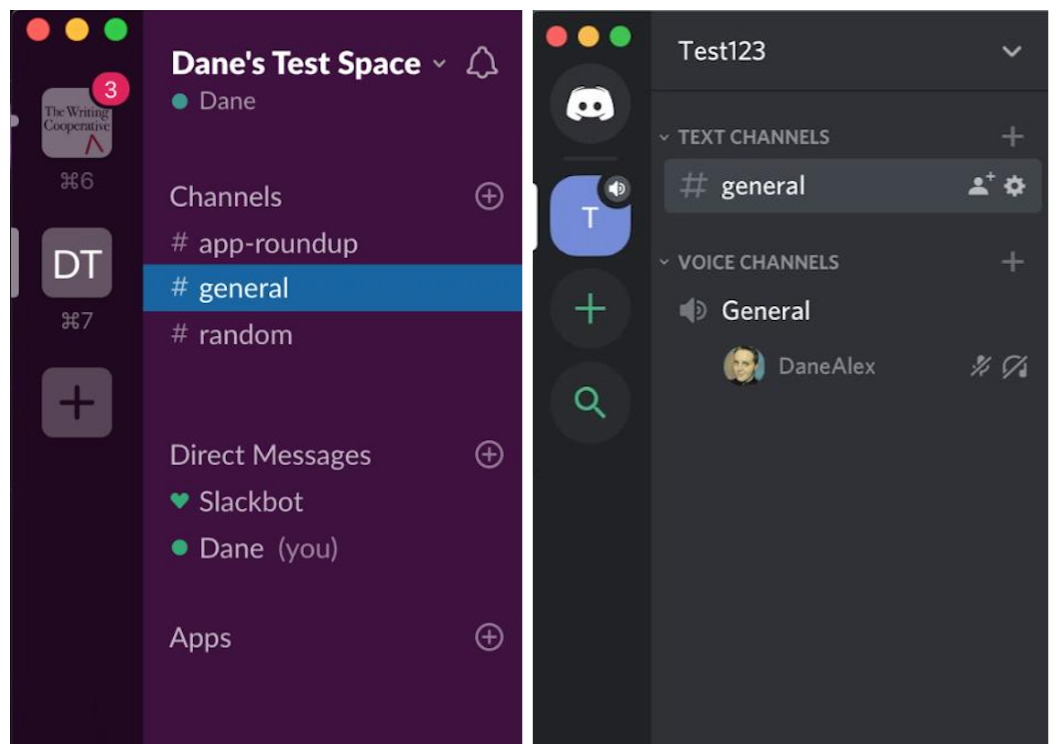 Slack on the left, Discord on the right

The selected channel appears in the main window to the right, and again, looks identical across the two apps. Plus, both platforms let you use @ mentions, upload files, and add emoji (and even custom emoji). If a Discord team member is to be believed, all these similarities are because Slack’s interface served as inspiration during Discord’s development.

Once you dig beyond the aesthetics, though, things are a little different. On Slack, each team has a designated workspace: a separate area where a team’s chat channels are housed. Every user has a separate login for each workspace they’re in. (For example, if you had a workspace for your full-time job and a workspace for your freelancing, you’d need to log in to each workspace individually to access the channels. Toggling between the two is simple once you’ve done so.) Once you’ve logged in to a workspace, you’ll have access to all of its channels and be able to exchange direct messages with any other user in the workspace.

In Discord, on the other hand, servers (the Discord equivalent of Slack’s workspaces) are associated with your user account, so you just have one login for all your servers. The main impact this has is with direct messages. In Discord, when you want to view direct messages, you have to navigate out of your server and into an aggregated list of messages. But that does mean you can chat with anyone in any of your servers from the same interface. Whether it’s better to have direct messages contained in corresponding workspaces or aggregated in a single list is a matter of preference.

There’s one feature that Slack has added to the messaging experience that Discord doesn’t offer: the ability to turn a message into a separate conversational thread. This is a great feature for keeping discussions more organized. Instead of having all replies in a single feed, mixed together with the other messages from users having different discussions, threaded conversations let you keep those simultaneous conversations separate while still keeping them in the same text channel. You can also choose to view all your threads to be sure you’re keeping up with any ongoing conversations. 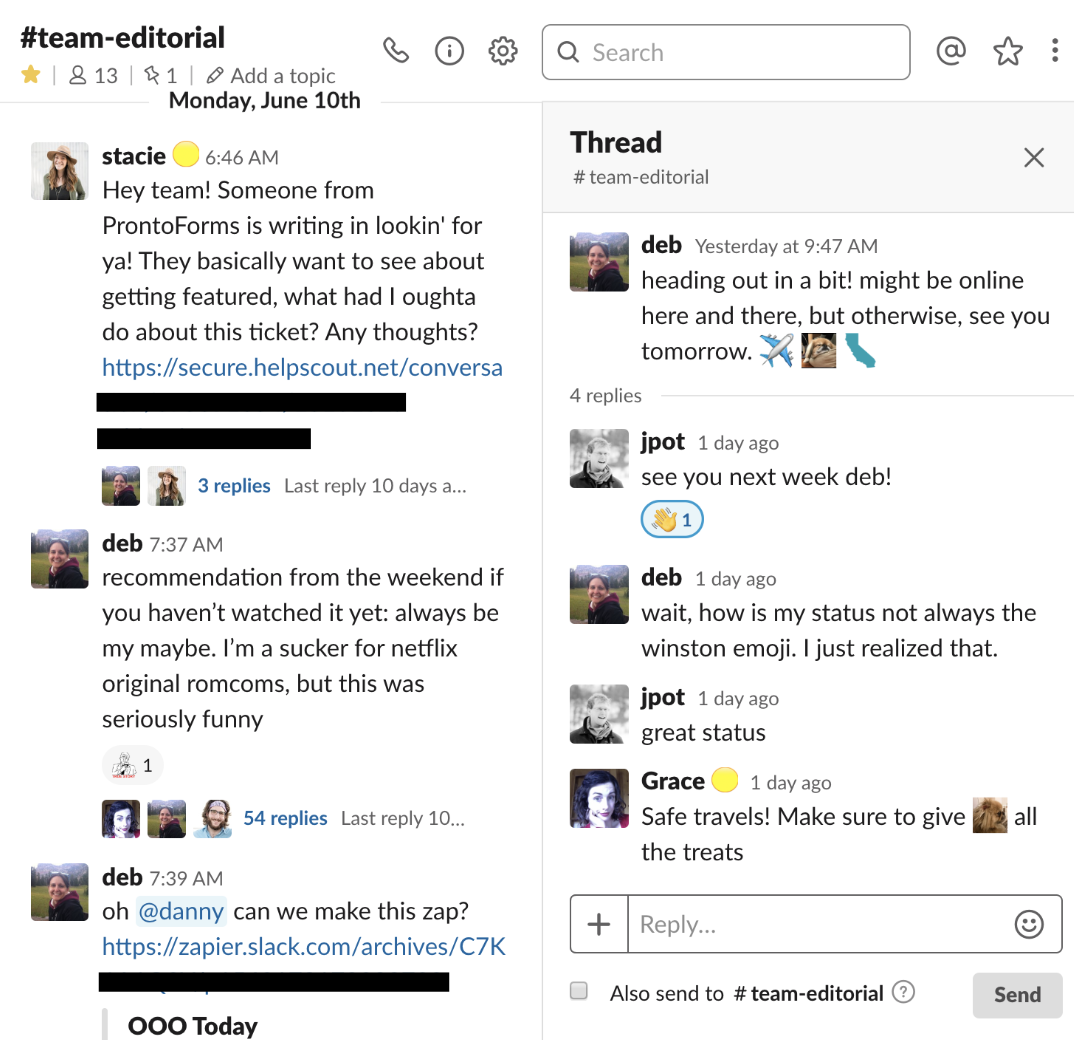 Both platforms give you the ability to quickly find what you’re looking for with built-in search functionality, but Slack is particularly well-known for its robust search and filtering options. Slack can quickly locate (by keyword) any message in your history (or within the 10,000-message history for free Slack accounts), and you can also search by username or file name to find what you’re looking for. Discord’s search functionality works similarly, but we found that it’s not nearly as capable as Slack’s.

Discord’s voice channels work in the background of the app while Slack’s approach is more like a standard conference call. Slack’s video chat offers more features.

The approach to voice communication is an area in which Discord and Slack are finally different. In Discord, voice channels are kept separate from text channels. To access a voice channel, you click on the channel, and you’ll immediately begin communicating with up to 99 other users in that channel. The voice communication happens in the background with no other change to the interface. In fact, the only indication that you’re actively connected to a Discord voice channel is the connection status indicator in the bottom corner of the app.

Since Discord is geared toward gaming, it makes sense that voice communication would be just as core to the product as text communication. There are even some special features to take it further: The Push-to-Talk feature is like a walkie-talkie function where you’ll only be heard if you’ve pressed a button. When you’re on a call with nearly 100 people, that can be a lifesaver.

Slack’s voice communication is much more deliberate—more like starting a call on Skype or creating a video conference on Zoom. On all plans, you can start a voice call from a direct message, and the user you’re calling will receive a notification on their device. With the paid plans, you can start calls for a whole channel. After pressing the call button (the phone icon along the top of the window), confirm that you want to start a channel call and the call will be accessible via a link automatically posted to the channel. Up to 15 total participants can join the call by clicking that link. 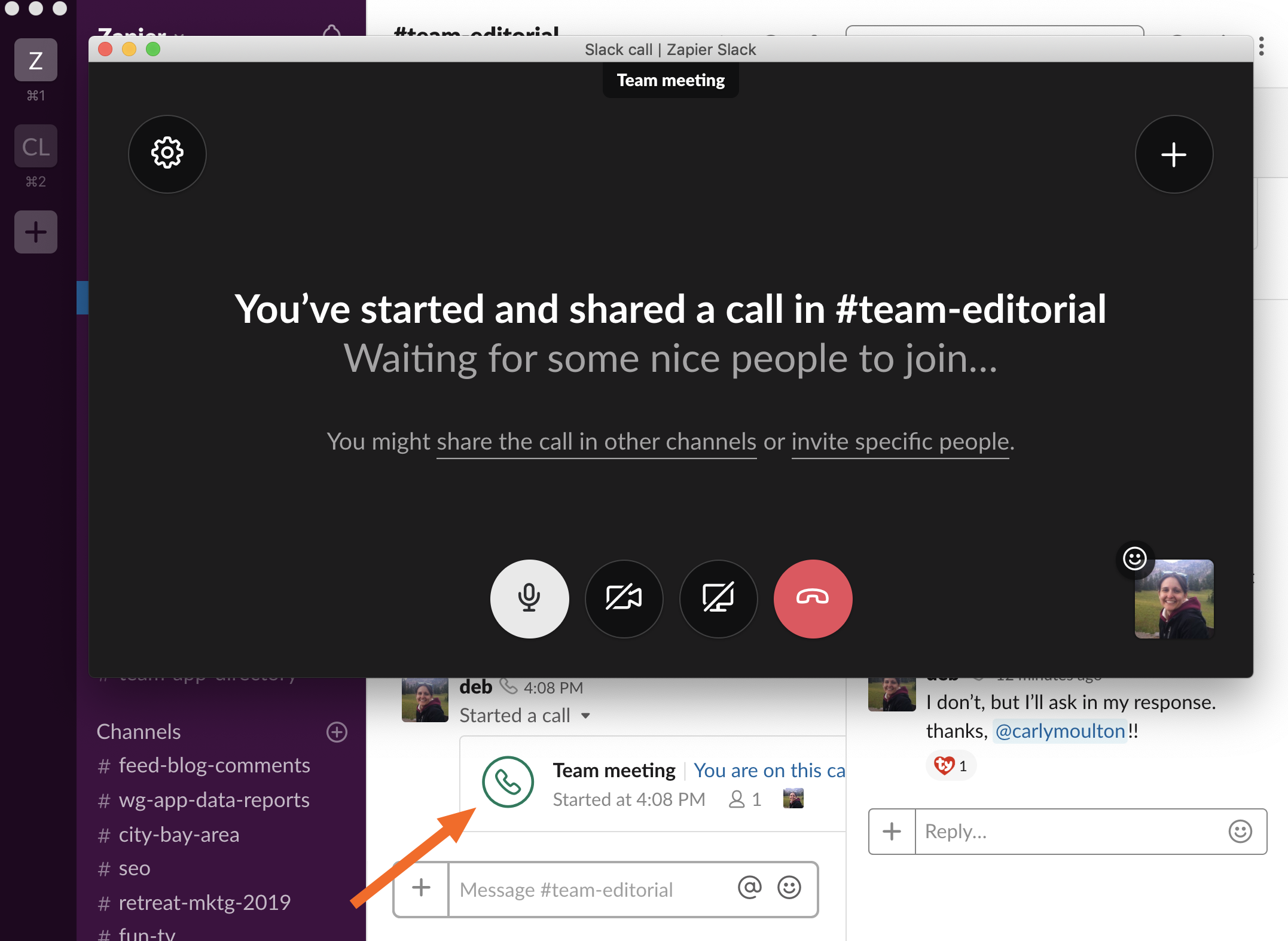 Both platforms also allow for video conferencing. Slack works similarly to other conferencing apps, where you can toggle video on or off during a voice call. Discord’s implementation, on the other hand, involves starting a group DM with the other participants and then initiating the video chat. Both Discord and Slack offer screen sharing within their calls, but Slack’s is more advanced, allowing users to annotate and even control each other’s screens. If you’re using your team chat app as your video conferencing tool as well, Slack is the way to go.

On Discord, there are two paths for expanding functionality: native integrations and bots. Discord is limited to 10 native integrations: YouTube, Blizzard Entertainment, Twitch, Skype, Steam, Reddit, Facebook, Twitter, Spotify, and Xbox Live. You can see that these integrations are oriented toward gaming. For example, with the Twitch integration, Discord lets players set up automatic notifications on their Discord servers, alerting other players when a Twitch live stream has started.

While its native integrations might be lacking, Discord’s bots, developed by members of the Discord community, help to fill in some of the gaps. Bots bring a variety of unique features to Discord, from setting reminders for other members of your team to streaming music from Spotify over Discord voice channels. There are even bots designed to bring additional third-party services to the platform, and they’re extremely easy to set up. Once you install a bot, you essentially “invite” the bot to your server in a similar way to inviting other users; bots added to your Discord server can be found under Members, the complete list of all users (and bots) in your server. 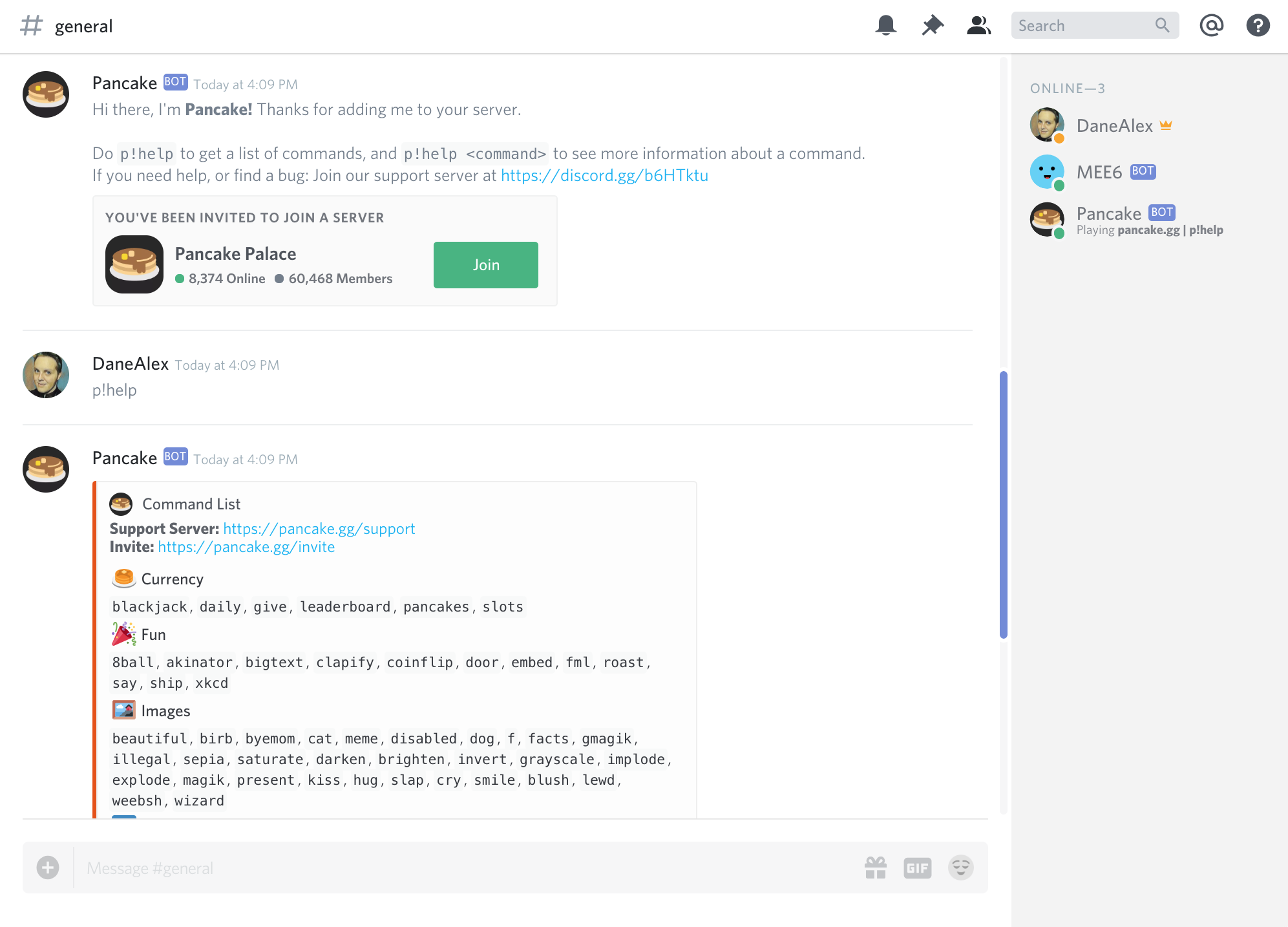 Though easy to install, bots can sometimes be tricky to use because the commands vary. In most cases, the command begins with a dash (-) or an exclamation point (!).

Slack offers almost 1,000 native integrations that have deep functionality within the platform. For example, with the Google Drive app for Slack, you can receive updates on any activities happening with files in your Drive. So if someone on your team leaves a comment on a Google Doc, for instance, you’ll be notified and can address those comments accordingly. All the interactions you’ll have with Google Drive in Slack are contained in a designated thread. It works similar to a direct message, but instead of taking place between users, the thread is between you and the Google Drive bot. Through your interactions with the bot, you can manage the integration, change settings, stop notifications, and so on.

Other Slack integrations use a special command. For example, if you use the GIPHY app, type /giphy followed by a search keyword or phrase (e.g., /giphy puppy). That will return a result that’s visible only to you. If you like the result, click Send, and Giphy will add the GIF to the channel for all users to see. Alternatively, you can click Shuffle for a different search result or Cancel if you’ve changed your mind. 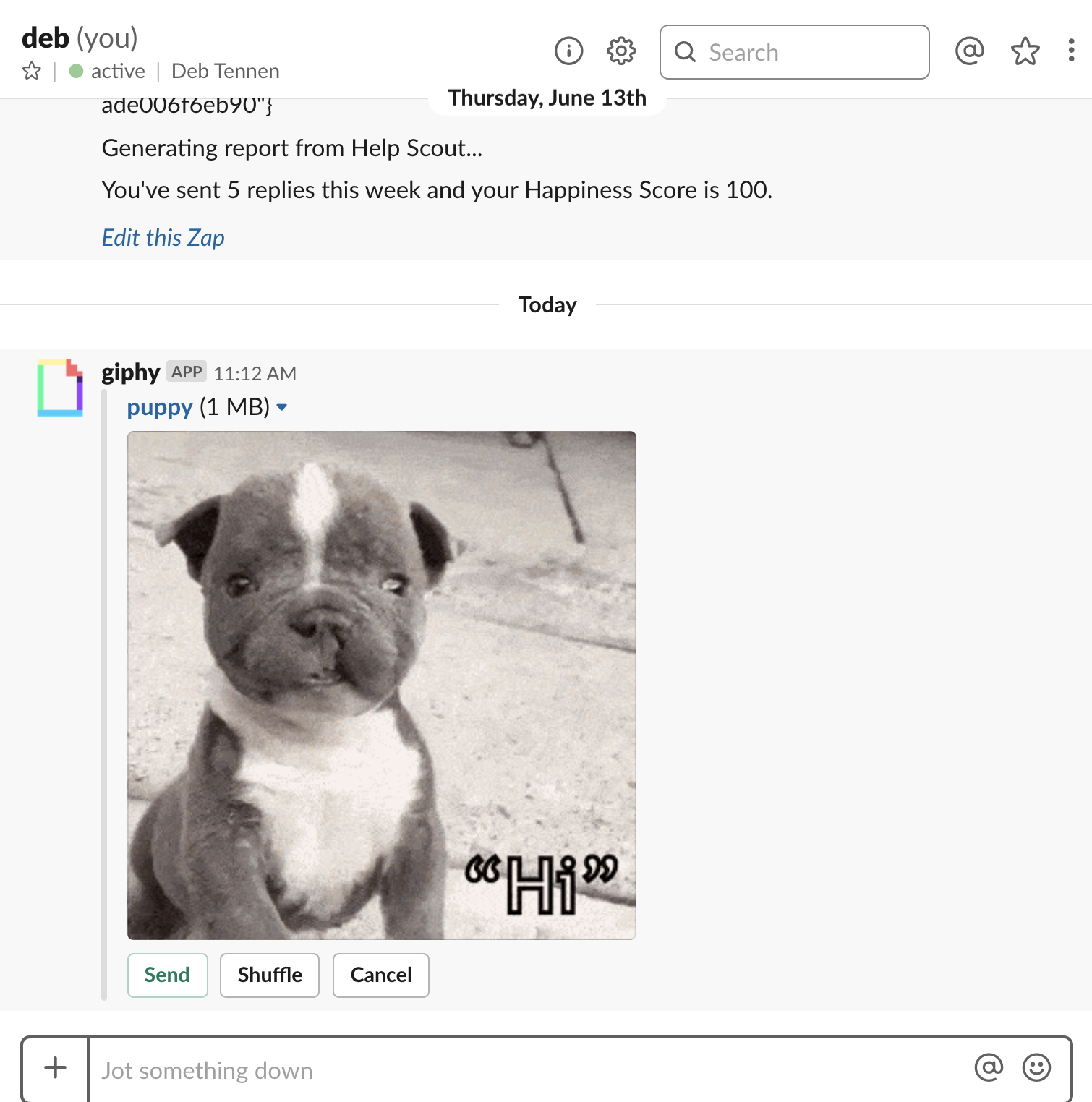 Which Team Chat App Should I Use?

Discord and Slack share many of the core features that you’d expect from a team chat tool: a straightforward interface, organized messaging channels, the ability to easily share files and media, and plenty of versatile integrations.

The native integrations and countless bots continue to make Discord the obvious choice for gaming. But Discord can also be a good choice for small teams, especially because of the robust free plan. For larger teams or situations where enterprise-level support and a diverse library of productivity-oriented integrations are important, Slack is definitely the winner.

Finally, here’s an at-a-glance feature comparison between Discord and Slack: